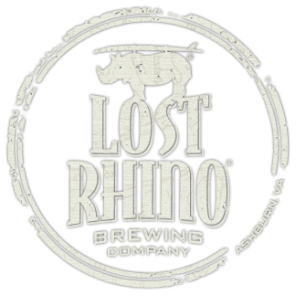 ALL ABOUT THE RHINO
First off, what’s the deal with the name Lost Rhino? Well, the “Rhino” in our name was actually inspired by a surfing term, a rhino chaser: someone out to find the best waves, the biggest waves – a true adventurer. The “Lost” we just added because we have a West Coast/surfing vibe, and there’s not an ocean in sight of Ashburn, Virginia. We think it makes some sort of sense.


Anyway, our story began back in 2011, Loudoun County, Virginia was starving for local craft brews. Old Dominion Brewing Company, which had been brewing in the county since ‘89, packed up their operation in 2009 and left for Delaware, which left a void in the local craft beer community. Matt Hagerman, Lost Rhino’s founder, felt like it was time to start his own adventure, and having been a brewer himself at Old Dominion, he knew exactly what he needed. He purchased some of Old Dominion’s brewing equipment, including its 25 barrel brew house, found his own space, and started setting up the brewery. Matt’s intention in starting Lost Rhino was to bring the spirit of craft beer back into Loudoun County, and began brewing some of our first and most beloved brands: New River Pale Ale, Rhino Chasers Pilsner, and Face Plant IPA.


Nowadays, Lost Rhino has grown quite a bit since it’s founding, but we have never lost sight of our love for the craft. In the brew house, we take pride in bringing classic styles and local flavor in all of our beers. Everything we craft is personal; we thrive on choosing the scenic route, the tough challenge, the road less traveled.


It’s time to Get Lost!
Click to set custom HTML